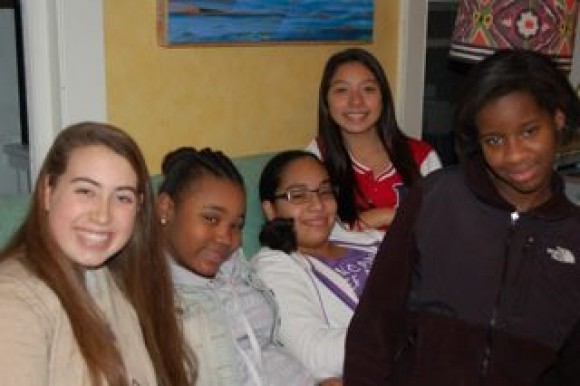 The LEAP Program: Successfully Connecting Youth With Other Cultures

I was recently introduced to a woman who is doing something different and dramatic in the lives of young people. Lauren Calahan is the mother of four children and lives on the “Gold Coast” of Connecticut, in a town called Darien. Calahan was a career teacher who became more and more interested in finding ways to make personal connections that break down the unnecessary barriers that divide communities, by encouraging children from communities like Darien to get involved in making an impact on the lives of children who were not nearly as fortunate, whether here or abroad.

But the more she discovered about the track record of such initiatives, the more frustrated she became. “Most of what I ran into was a group of affluent students going into a low-income community, very well-intentioned, and taking on a project, say rebuilding a decrepit playground, with absolutely no collaborative interaction with their peers in that community. The more I witnessed this, the more I came to believe that our efforts had a limited effect because we lacked the integrity of community engagement. I began to ask, ‘How can we work together in the communities we are serving?’ The answer I kept getting back was, ‘That won’t work, we can’t do that, that would be embarrassing for them, it is our turn to work on their behalf.’ I never accepted that and my goal became finding a way to join communities together, encouraging empowerment and collaboration rather than entitlement and dependency.”

So she started her own nonprofit organization, LEAP, using a completely different model. According to Calahan, “It’s a partnership, not a handout. It’s not about writing checks to groups who are in need, it is about joining disparate groups of people and asking, ‘Who are you? Who do you want to be? Pick a problem, and start to solve it.’”

Every LEAP contains three partners, two of which are geographically near each other. Of the two, one is considered affluent, the other non-affluent. The third partner is a global one, located somewhere in the Third World. According to Calahan, “We did this so that each community would recognize that their story was just that, a story. Their perspectives about the other towns or communities were tainted by stereotypes and prejudices that were created long before they were born. Teens have to understand that someone will always have more or less than another, and all that matters is what we decide to do with our circumstances. What better way to discover this than working side by side, writing weekly to your Third World partners who have more limited access to education and prosperity than we have here in America, yet who have perspective and hope. Meanwhile, the Third World partner is engaged in a weekly discussion about how to strengthen their community, build a business, use writing as a venue for change and look at the American students as a resource for connections and education that they do not always have.”

Calahan has several LEAP partnerships going. One began last Spring with students from Darien High School, partner #1. They partnered with youth from an organization in Uganda which works with rescued child soldiers, partner # 2. They decided to communicate weekly through Facebook to create an online magazine filled with reflections and representations of topics that each group felt strongly influenced an individual and his community — topics like stereotypes, family, poverty, self confidence, drugs, and violence.

This past fall, the Darien students asked the Carver Foundation of Norwalk, a community center and after-school program in a nearby city, to be their local partner — partner #3. Youth in the Carver Foundation are 86% Black or Hispanic; 81% are from single-parent families; 87% live in low-to-moderate-income households. Since CNN Money listed Darien as the ninth-highest “top earning town” in the United States, it would be hard to imagine two more different groups of students. Calahan started taking the Darien students over to Norwalk once per week, and as expected, “There was a lot of suspicion at first. The Norwalk kids were wondering ‘who are these kids who come here thinking they are better than we are, thinking they can help us?’ and the Darien kids were wondering if they would be accepted. And the Ugandans of course looked at both United States partners as “one,” a group of Americans with whom they get to create change and from whom they will learn.”

The LEAP approach is different because according to Calahan, “We work hard to ensure that everyone knows that LEAP is about building a partnership of equals, a team of people who have more in common than they realize and have the power to change their world for the better, if they work together. Americans always start off thinking that they will be ‘helping Africa’ and end up realizing that we all have so much to learn from each other and need to feel grateful for the opportunity to have a relationship based on trust, and the freedom to ask the tough questions, to discuss the taboo topics, to understand the prejudices that keep our communities apart.”

She has another LEAP in operation at the affluent Brooks School in Massachusetts, this one focused on writing. An English class there is reading a book that takes place in Sierra Leone, and this Writer’s LEAP offers them an author familiar with Sierra Leone, fed live into their classroom, while they simultaneously connect with students in Sierra Leone, and also with students in a non-affluent local Massachusetts school. “They share their perspectives on the characters in the book, their lives, their struggles, their vision for a different future,” says Calahan, “as not only a means to become better writers and readers, but as a means by which to prove that writing is an important way to share your voice, and reading is a way to test your assumptions. Students have too often lost the real-world connection between academics and their future. My view is, if you have truly learned something, then put it to work in the world.”

Perhaps the greatest testimony to LEAP is from the students themselves. According to one United States student, “LEAP has changed the way I look at community. A year ago, I was clueless about what was going on in the town next door, and now, we share strong connections, understand the negative effects of stereotypes, and thanks to Skype, have built a partnership with students from Africa. LEAP may seem small, but it helps us to experience the bigger picture.” And this is from a young Ugandan who was formerly a child soldier: “LEAP has decided that poverty is the world’s biggest problem and education is the very best solution to this problem. To create an engine of change requires connecting our communities and working hand in hand, irrespective of our differences. To minimize poverty in both our countries, our team will identify our financial resources, inspire our communities, educate scholars and empower the individual to see himself as an integral part of the solution.”

What Lauren Calahan has created with LEAP is making a significant difference in the lives of young people. And it should be replicated throughout the country.

Hi to every , since I am really keen of reading this blog’s post to be updated on a regular basis. It consists of good data.